Wowing the Taste Buds of 1.4 billion Chinese Consumers with Hetbahn

- CJ CheilJedang, officially launches the Hetbahn into the Chinese market to kick-start its instant rice business

- Opened a exhibit hall of Hetbahn under the concept of museum in Shanghai for three days starting on the 10th, drawing a positive response from locals 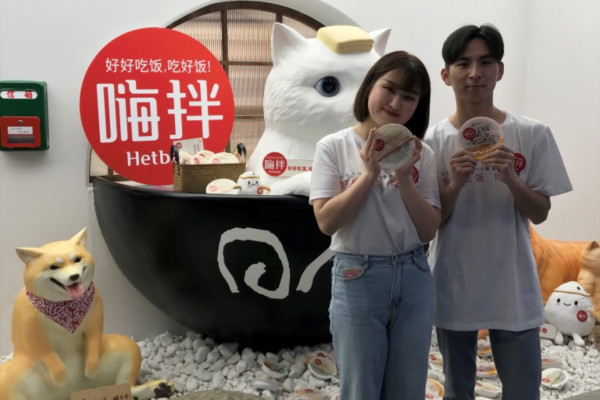 With Hetbahn having been officially released into the Chinese market, CJ CheilJedang is gearing up to commence its Chinese instant rice business in earnest. Just like it created an instant rice market in South Korea by launching Hetbahn and subsequently led the growth of the market in the past, CJ CheilJedang is now planning to penetrate the Chinese market. The company’s strategy is to wow the taste buds of 1.4 billion Chinese consumers with the taste and quality of Hetbahn, which was created with the company’s differentiated research and development.

In recent years, the demand for simple HMR products has been increasing in China. In particular, as the consumption of rice is an integral part of the country’s food culture, Chinese consumers are highly interested in rice products. In turn, many food and beverage companies including Heidilao and Samjeon are offering a variety of processed rice products, and lately, the market has been seeing the launch of an increasing number of self-heated rice products, which can be heated and eaten instantly thanks to their built-in heat packs.

The gross domestic products (GDPs) of cities like Beijing, Shanghai and Guangzhou, which are leading the Chinese economy through rapid urbanization, are currently in the range of 20 to 25k USD. In the case of Korea and Japan, which are already familiar with processed rice products, their processed rice markets started emerging when their GDPs were between 15 to 20k USD. Taking close note of this phenomenon, CheilJedang determined that Hetbahn, created with the company's extensive R&D, has sufficient potential for success in the Chinese market on the strength of its taste and quality and subsequently launched it in China.

CJ CheilJedang’s strategy is to rapidly establish Hetbahn in the Chinese market through a variety of activities. To that end, CJ CheilJedang ran a public relations space that provided visitors with the opportunity to experience its products first-hand, for three days starting on the 10th in Shanghai, China. The PR space was arranged at Rishiji(日食记) Storelocated at Shimao International Plaza (上海世茂广场) on Nanjing Road East (南京东路), Huangpu, Shanghai. That is, in order to effectively promote its products, CJ CheilJedang created the PR space in conjunction with Rishiji, China's most popular social platform for cooking.

The PR space, designed with the theme of “Instant rice that is even more delicious than cooked rice,” housed a Hetbahn museum. Not only did the Hetbahn museum exhibit the variety of Hetbahn products released since the initial launch of Hetbahn in 1996, but it also informed visitors of the unique characteristics of Hetbahn, including its same-day polishing system, sterilization process, and packaging technology. CJ CheilJedang’s aim with the museum was to enhance people’s understanding of the product by showing them the results of the company's continuous research for creating tastier rice.

In the PR space, an event called the “Theme Table” took place followed by a Hetbahn tasting event. The “Theme Table” proposed three-meals-a-day meal menus that utilized Hetbahn in a manner suited to Chinese food culture while the tasting event provided the opportunity to taste a variety of Hetbahn products, including white rice Hetbahn and multigrain rice Hetbahn. For the three days, the PR space was visited by as many as 35,000 consumers and drew a lot of attention, so much so that it even attracted visitation from Chinese local media.

The Chinese consumers showed particular interest in product tasting. The responses from the consumers who experienced Hetbahn for the first time at the tasting event include: “I’ve never seen this type of product before. I think it doesn’t pale in comparison to freshly cooked rice in terms of taste and quality.” “While self-heated rice takes as long as 15 minutes to be heated, Hetbahn only needs to be put in a microwave for about two minutes to be readied. So, I think Hetbahn is a much better product in terms of convenience.” “In terms of the freshness of taste, all the other processed rice products I've tasted so far can't even hold a candle to Hetbahn.”

Generation Z of China, in particular, will be targeted extensively, as the company expects them to constitute a major consumer group for Hetbahn. Generation Z refers to a generation that mainly purchases products online while spending most of their time at home doing their own things, and they pursue products that match their lifestyles. CJ CheilJedang plans to make concerted efforts to have Hetbahn recognized by them as “Instant rice that is even more delicious than cooked rice.”

Going forward, CJ CheilJedang plans to expand its product portfolio to include, in addition to the rice-focused Hetbahn, the easily enjoyable Hetbahn Cupbahn and Hetbahn Porridge which is perfect for breakfast. The company’s goal is to build its image as a rice expert in the Chinese market and secure a dedicated Hetbahn production base in China so that it can achieve sales of at least 100 billion KRW in three years and, in turn, cement Hetbahn as a representative instant rice product in China.

"In China, Hetbahn is mainly consumed at the moment by Korean immigrants and international students, which means brand awareness and recognition of the product are still rather insignificant. However, the results of our research surveys of locals show that Hetbahn is thought highly of by Chinese people in terms of taste and quality. Therefore, we think it has sufficient potential for success in China,” said CJ CheilJedang CEO Shin-ho Kang. “Just like we have made bibigo Korean Royal Court Dumplings a success in China whose food culture is similar to Korea's, we will do our best to dominate the Chinese rice product market, spreading K-Food across China.”